2009, I think, was an underrated year. I am also aware, that not many people agree with me on this topic. The word ‘iconic’ is thrown around far too liberally nowadays, but in this case I am tempted to use it. I’m not sure why it holds such a special place in my heart, 2004 and 2007 were also great years but I think they just fall short of 2009 based on one simple fact. At the time, everything about it felt so cool but there is nothing like hindsight, and the Facebook ‘On This Day’ feature, to show you that we were of course not cool in the slightest.

Below are a list of 5 quintessential aspects which help to sum up 2009:

Flip Phones of all varieties

Okay so if you were a teenager in 2009 you were probably the proud owner of a sliding/flipping/twisting mobile phone. From the sleek but virtually unusable LG Chocolate to the achingly cool (but as we have established definitely not cool) twisting Sony Ericcson, if there was a process to opening it, we went mad for it.

2009 was when this mobile design was at its all-time high before touchscreen technology came and saved us with its minimalism. The IPod Touch paved the way for the phone layout we all know and love but there is some nostalgia to be had in the mobiles of 10 years ago. And, was there really anything as satisfying as hanging up on someone and angrily flipping your phone shut?! No, there was not. 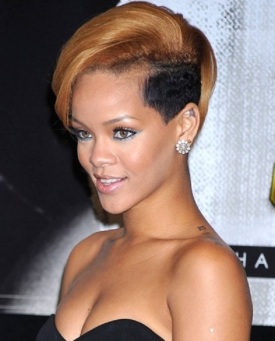 Victoria Beckham, Rihanna, Pink, Robyn. What did all these women flying high in 2009 have in common? Yes, the sub title gave it away; their hair. There are some years that bring with them a stand out hair style. In 2010 it was the bright red Rihanna hair that 1 in every 10 girls seemed to sport. In 2013 ombre hair was all the range. 2016 had everyone going mad for pastel shades, the list goes on, but before all of these trends 2009 brought with it the shaved side of the head and a bob. At least one person you knew was rocking this look and you even considered it at one point. The awkward growing back of one side of your hair though is enough to make you thankful you never went through with it.

Another quintessential aspect of 2009 was the style, or maybe lack of it. Were you even ready to go out of your door without a couple of bows in your hair to match your graphic T-shirt and ripped jeans meticulously held together with pins?! Punk inspired fashion had a revival but without bringing along any of the edge that it was born with. Instead we had a sort of pop/punk hybrid popularised by the bands of the time (think Hayley Williams, Pink again, Fallout Boy etc.)

‘Scene Kids’ were the local leaders of style, a bright and edgy alternative to the Emos and Goths we were used to, and with them brought another punk trend: brightly coloured, big hair. This particular look was one that I definitely fell prey to, I am still guilty of indulging in big hair, but as a red head I never bothered with the dying part.

Fellas, this one is for you. I think we all remember Ed Hardy T-shirts, I personally am still waiting to regain fully functioning vision after gazing one too many times at a bedazzled chest. Commonly adorned with tigers, a rose and possible 100 studs, wearing one of these masterpieces undoubtedly made you feel like one.

However, as is the case with all of these trends, I’m sure you have already deleted or untagged yourself from any evidence of partaking in the ocular offence. I don’t blame you. Admittedly my boyfriend at the time was a wearer of these monstrosities, but that isn’t the point.

Last but certainly not least on this list, 2009 was the year where autotune really became popularised. I know you remember Jason Derulo’s smash hit ‘Whatcha Say’ and you have thus since been afflicted with involuntarily singing his name in your head every time you hear it! (Yeah like that)

Rappers like Lil’ Wayne were using autotune in their songs as well as the electronic sound being a staple in the world of Pop too. Artists such as La Roux, The Black Eyed Peas and David Guetta were all employing the electronic sound to much success, helping to create a sound that can easily be pinpointed to this wonderful year.

I would also like to give a special mention to the makeup choices we made during this year, I am sure we will all be punished appropriately in the future.

In many ways, 2009 feels longer than a decade ago. The examples listed above serve to date the year pretty effectively, I can safely say that none of those trends need reviving any time soon, their current replacements feeling futuristic in comparison. But, horrendous style choices aside, it was the time that I look back on fondly. If nothing else, it makes me feel a lot cooler now than I was, but it also makes me wonder what choices I will be scoffing at in 2029.

Let me know if I missed anything. Do you have any favourite memories of the year?

Skint, single and speaking about it. View all posts by noidat23