Okay, so I didn’t really know what I wanted to start writing about so I looked in the mirror to do some soul searching and got distracted, as always, by my skin.
I have acne. I’ve had acne for ages. It’s not nutrition based, not a symptom of needing to drink more water or because I wear cheap makeup; it’s cystic, hormonal and it’s here to stay. (I’m being dramatic, it’s starting to go)

I don’t want to ramble on about it too much as the purpose of this piece isn’t to whine about my skin, but I want to create some context for you.

Okay, so, I started getting spots when I was in year 7/8. Nothing major, just teenage skin, although it always seemed a bit worse than my friends’. It stayed like that until I was 16 and then kicked up a notch, at which point I began to go to the doctors for some advice. Advice turned into going on 5 or 6 different acne medications, none of which worked. Topical treatments also really aggravated my sensitive skin so they were out too. Eventually when I was 18 they put me on the contraceptive pill. I tried a couple before they decided on Dianette. This did more for my skin then all the other efforts combined, I had clear skin within two months, minus some scarring, and off I went to Uni feeling fab.

Fast forward 5 years to this January and I’ve just gone through a break up. In classic female fashion I want a whole new start for 2018. So I stop using the pill. I would say it took 3 months until my skin erupted, by the end of March I could definitely see a noticeable difference, long story short by July I was looking a hot 16 year old mess.

The point of writing this, I hear you all wonder, is not to wallow in my own grease, but instead to raise a question; why does acne have such a strong effect on people? I believed myself to be past caring about such trivialities, having been through it before and coming out the other-side with only a few visible scars to show for it. However, I was shocked at how much it affected not only my opinion of myself but how I thought I would appear to other people. It is all well and good thinking that beauty is only skin deep and not important in the grand scheme of things, but when we operate in a world where appearance counts for a lot, what are you to do when you don’t like the skin itself?

Predictably, I scurried off and got myself back on the pill, started taking probiotics and zinc to improve my gut health and switched to all organic face washes and my skin has vastly improved. (I will include pictures) But what I should have done is leave my skin and go and get to the bottom of the issue and heal it naturally. Alas, my vanity prevented this; so I know that one day, when I stop the pill, the problem will quite literally re-surface.

So why does the outside take centre stage where the inside is left to its own devices? Well, first and foremost, because we can see it. The old adage ‘out of sight out of mind’ is extremely pertinent in this case. Looking in the mirror every day and not liking what you see is a draining existence.

I have also noticed that the products we buy for skin are also part of the issue. Not just because many things will actually make your skin worse, but because of how they are named. ‘Skin Perfecter’, ‘Complexion Corrector’, ‘Concealer’, all of these products are marketed to us with the intention to fix a problem. The problem being our face. Buying and using concealer will eventually convince you that certain parts of your face which occur naturally are unsightly and need to be covered up, hidden, concealed. The same goes for correctors and perfecters, smoothers and toners. All descriptions that ingrain the idea that you are not ‘perfect’ or ‘correct’ without them. This leads to a really unhealthy relationship with makeup in a lot of cases. Many brands will prey on people with insecurities for this reason, which is why they are branded towards people who want to cover up their acne. The hard work is already done for them, they just need to capitalise on our belief that, in order to look ‘good’ we can’t have visibly ‘bad’ skin.

In addition to this, generally speaking, we are creatures that are hyper critical of ourselves and, sub-consciously or otherwise, of others too. I think that is part of our problem re being image conscious. I would argue that the route to true self contentment is through not looking at other people and picking up on their flaws. Thus you would have no reason to believe that anyone would be worried about your own. It’s cyclical. The solution as to how we view ourselves is rooted in how critically we see other people.
These are just a few thought I have on the subject and felt like sharing. If you agree/disagree with something that I have said let me know. Let’s talk about it!

As promised here are pictures of my acne from August to November sans makeup (I’m so brave.) I started to keep track of how my skin was improving in attempts to negate the self-loathing thing that acne sufferers have. These are my evidence, to combat my own toxic thoughts, and sharing them is an attempt to purge myself of the thoughts all together. 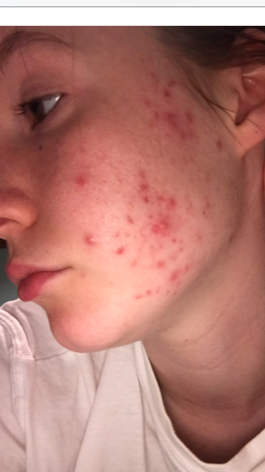 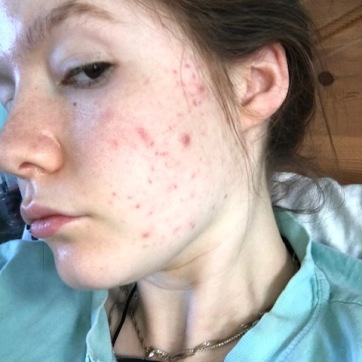 Skint, single and speaking about it. View all posts by noidat23